How we found out J has Juvenile Dermatomyositis 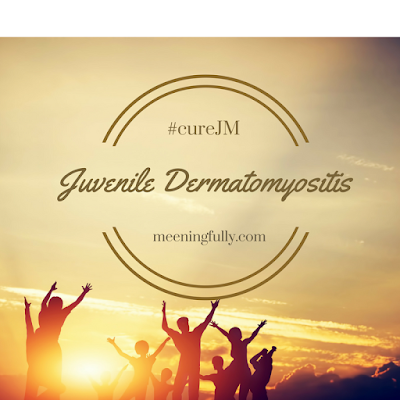 I don't even know where to begin because never in my life did I think stories I read about kids and their families battling rare conditions would actually happen to us.


Right up to slightly more than a month ago, J has been a wonderful kid. Well, he still is just that he is not quite the same as he used to be.

He loves the outdoors, gets excited over the hottest and newest playground in town and sets his eyes on the rainbow belt in Taekwondo ( he insists that the best and highest level in TKD is the rainbow belt).

He is often the spark in the room and leads conversations (of any type)  in his class.


He first complained about pain in his thighs, which we put off as muscle strain from coming down a bouncy castle slide too quickly. We told him it will go away.

The pain progressed to J limping up and down the stairs. Yet, we thought it was a muscle pull from the previous episode, and hoped it will go away too.

Slowly, throughout that week, all he wanted to was lounge around the sofa, whether it is at home or in school. We got impatient and reprimanded him for being a sloth.

It was the same week when his bout of low-grade fever started. The school called us up after nap time to say he has a fever of 38.2 degrees, so we thought he might be coming down with something and that could explain his lethargy.


Friday, he was fine with only a slight temperature at 37.7 degrees. We monitored and agreed to send him for TKD on Saturday morning since he felt fine.

But, he wasn't fine at all. He cried in class for the first time, and this bothered his coach enough for them to highlight his discomfort to us.

The weekend went by in a blur as we tried to manage his moodiness.

Being the working parents we are, we decided to take him to NUH A&E on Sunday evening just to have a peace of mind before we return to work the next day.   I somehow had a nagging feeling he might have dengue or zika given he has multiple insect bites on his right arm.

He was given the ok, and the doctors sent us home with "just a viral fever" diagnosis and to bring him back if his fever goes beyond 7 days.

We kept him home for 2 days before sending him back to school on Wednesday.

He apparently behaved badly with tantrums and needing his teachers to help him to shower. He cannot even help himself up from his mattress after his nap. Personally, I don't like it when teachers call me to complain about J's misbehavior, hence you can imagine my displeasure with the boy when he got home.

Then everything just progressed rapidly. He refused TKD again, peed on the floor because he couldn't get to the toilet fast enough. His legs gave way and he fell on his pee, yet he is unable to get up on his own.

We took him to the playground, but he looked down from the slide and started to cry.

THIS ISN'T my J. My J does not behave like this at all. Hence the next day, with a spike in his fever, we packed our luggage, headed to Mt Alvenia, and asked to be admitted right away.


It was a Sunday, 9 October 2016.  This started our family's life changing journey

***
At that point, we were very grateful for a pediatrician (Dr H) who was very alert to symptoms to take immediate action of testing for all possible illness. J was first suspected of either having Leukemia or Lupus. However, all his tests came back negative.

So Dr H activated another pediatrician, Dr L who specialises in Rheumatology as they also suspected J to have Juvenile Arthritis (JA). JA is rare, but not as rare compared to Juvenile Dermatomyositis (JDM).

So, test after test, we finally got a call from Dr H on 19 October 2016. He asked where I was, and wanted to see me immediately. This happens to be the week where I scrambled to get a ticket back home from a work trip because J had fever despite being on 6 hourly Ibuprofen.

I called the man. He dropped his work, and drove to the clinic.


I remembered the weekend prior to this, I googled a lot about J's symptoms, and it all pointed to the diagnosis. I showed it to the man, and while we held onto some hope that this is not going to be it, we sobbed.

And, the sobbing continued after this visit. We sat in the car for  what seemed like eternity. Trying to come to terms of what this is going to mean to the family. We also tried to compose ourselves to face the family and more importantly, the boy.

A lot of questions were unanswered, like, will he be able to go to school, will he ever be well, will this lead to disability etc.

Till today, we don't have all the answers.

But we knew we needed to firstly manage the pain before we can think about anything. So, we queued at Dr L's clinic despite not having an appointment the very next day.

Thankfully, he allowed us to cut queue and suggested we admit J immediately to start treatment pronto.

This is only the beginning.

I won't say that he has responded well to treatment so far. Improvements are not significant. However, the pain is definitely within manageable thresholds.

He still cannot stand beyond 5 mins.

He still cannot sit up on his own.

He cannot sit without a backrest.

Neither can he walk up the stairs.

He also cannot sit on the floor cross legged to play his toys.

He needs to slather on sunblock everyday because he has now become photosensitive.

And, it wasn't long ago our 4 year-old learnt to do all these like most kids.


His spirits are definitely better than before treatment because we have a supportive group of educators behind us who welcomes him back to school even though it means more work for them.

But, many other emotions surfaces because of this as well. This boy is well aware that he is not the same as before. He avoids his favourite activities, often with a knowing and confident smile.

But, I know he is sucking it up but it is probably killing him inside not to be able to do what he likes. This I know because this he takes after mummy.

The road ahead is very uncertain. But for now, all we want to do is work on his confidence and his emotional well being. Because nothing is more important than a positive mindset for the family to get pass this.

Thank you for all the support and love from people who all came forward to provide help, who reached out despite not knowing us. It will certainly go a long way while we navigate our way through this as a family. And, with the power of writing, I also hope I can help other parents who face the same situation because we know how it is like to be lost.


About Juvenile Dermatomyositis:
Juvenile Dermatomyositis (JDM) is a chronic inflammatory condition affecting the skin, muscles and occasionally other organ systems. It is rare in childhood, affecting approximately 3 per 1,000,000 children. JDM occurs more commonly in girls than boys, with a mean age of onset of about 7 years. In contrast to adult cases of dermatomyositis, JDM is rarely associated with internal malignancies. Childhood cases are however, more associated with inflammation and necrosis of muscle, calcinosis and small vessel vasculopathy. Mortality is also lower in childhood cases.
(Source: https://www.singhealth.com.sg/DoctorsAndHealthcareProfessionals/Medical-News/2013/Pages/Skin-Signs-Rheumatologic-Disease-Children.aspx)