- December 30, 2015
The year is coming to an end, and in my usual fashion, this is when we stop in our tracks, look back and decide if we had a fantastic year or totally hate it.

When 2014 closed, I was looking forward to 2015 and welcoming it with open arms as I thought things at work were starting to become stable, and I can spend some time on J and of course our IVF journey.

There were unexpected changes in the start of the year, and then it became a period of understanding, adapting, learning and lots of stress. 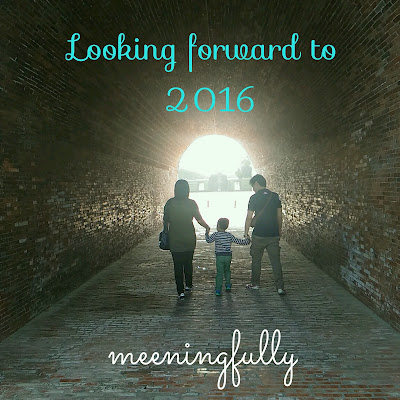 People say after the terrible twos is the terrific threes. I cannot agree more. Sure, there were more tantrums and unreasonable demands. On the same note, there were equally more conversations and more learning as a family. I used to say I like the infant stage more and do miss it, but this stage that J is at, has got to be the most memorable. And, I savour the times when the man and I are the boy's entire world till the time he wanders out of ours.

Sometime in May this year, I also got a little bit of a scare when my dad fainted on the road. He had to be rushed to the hospital, yet I was not around to be there for him. I am not the closest person to my dad, yet the thought of losing him isn't something I am prepared for. All's well now, but it is also a wake up call that our own parents are really old and it is a matter or time before we bid them farewell. Till then, we should really also spend quality time with them.

I earned myself a promotion this year. But not everything is smooth sailing. With any promotion, it is natural to think that my hard work and capability have been recognised. Then came the news that I was going to get a new boss.

So, that began the whole sussing out how to work with him, gaining trust, understanding practices all over again. In most circumstances, this should be a norm. However, during a period when we were also embarking on IVF, it took a lot to maintain composure and be level headed to get through the year.

Things are only going to get tougher as 2016 is a big year for the company on many levels. The learnings in 2015 will hopefully make navigating through 2016  little easier.

Our IVF story has been quite widely documented on the blog.

2015 was a big year for us. After my ectopic pregnancy in 2013, which was our first try for number two, it seemed like nothing we do can help us to conceive.

We decided 2015 will be when we embark on the inevitable IVF. However, every step we took didn't result in what we expected even though we already had the lowest possible expectations. Our story is here.

We are still thinking if we should continue with our quest for another child in 2016, constantly reminding ourselves how some other couples have succeeded despite trying more times than we have.

We are taking sometime to think through if we should settle for contentment or perservere while we can. That said, we recently concluded (not confirmed) that our current predicament is likely due to some damage to my right ovary during the ectopic pregnancy emergency surgery. All our artificial reproductive treatment post the ectopic incident showed that my right ovaries are not producing any eggs, and the ectopic happened on my right side. So, any decision we take, will require tenacity to see us through. Praying for wisdom on how to walk through this in 2016.

Even before we start the new year, we already know there's probably going to be more challenges ahead, and it will take some tenacity to go through it. Let's see if I come out of 2016 unscarth.

In all things, the key is to persevere.

When the going gets tough, find an outlet to vent it out. It is ok. We all need to release stress once in a while. What's important is that we continue to press on. When one way doesn't work out, find an alternative. There will always be a way out as long as you continue to believe.

As we bid 2015 goodbye, here's wishing each and everyone of you a fabulous 2016! Always remember, fabulous is how you want to define it.