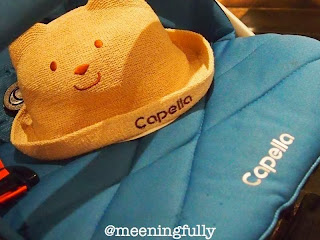 Two Sundays ago, we got up bright and early to join over 10,000 pretty aunties and jie jies at the Shape Run. Lucky thing was, Mummy got a room for us to sleep over the night before at Parkroyal@Beach Road together with my good friends MM and PP, who also joined us at the run. 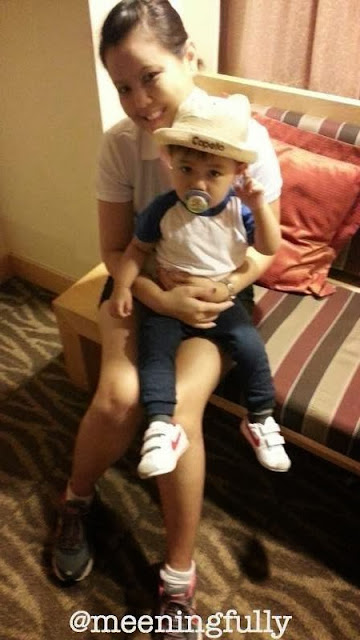 Mummy says she will update on the staycation later so I will just focus talking about the Shape Run.

If you have read mummy's review of my latest ride (Capella Cony S230T-13), you would have gathered that we were sponsored to take part in the 2.4km Stroller Fun Run ( a new category in this year's Shape Run) together with 9 other mummies and their kiddos.

We started making our way to the entrance of the event ground at about 6.45am and got there a little before 7am.

Yawns! We were the first amongst the group to arrive and so I decided to start the day with some exercise by playing catch with Papee. I think Papee needs somewhat more exercise than I do as he looked so lethagic. He sure did not thank me for making him chase after me, ensuring I don't get into trouble even before we officially start the day!

Mummy Irene and James arrived, and so Mummy hollered for me to join her in having our pictures taken. 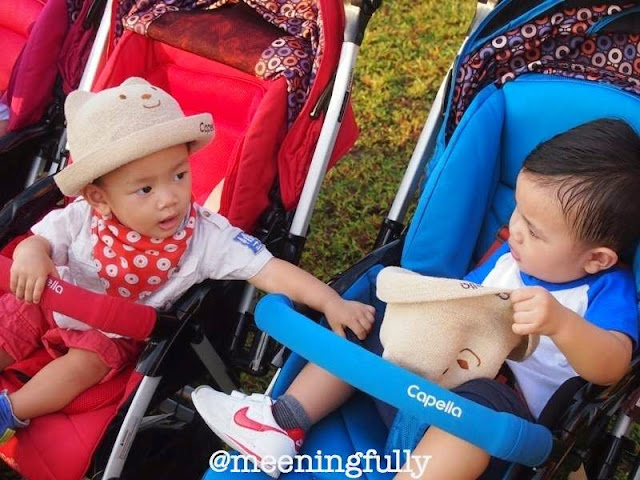 At 7.30am, we realised that most of the other mummies were waiting for us within the event area, so we started to make our way in.

Mummy had to push me through the grass area, which was a little bumpy. The larger wheels of the stroller helped smoothen the ride although I don't recommend using it across long periods of time grass patches.

More phototaking as we prep for the run, and I was getting bored. Good thing the stroller is perfect for me to lean back, relax and just enjoy the ride. 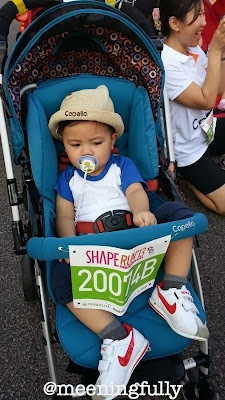 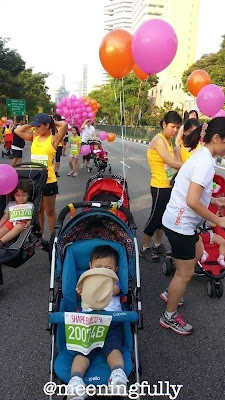 I was actually worried for Mummy as she was still recovering from her surgery. I guess I should not have worried as Mummy has decided she will stroll rather than run, and thankfully Mummy Flo and Mummy Eve were there to keep us company.

I would have loved to chat up with the other babies, but the weather was seriously hot! The sun was in my eyes. This was where the huge, full canopy on the Capella stroller came into good use.

With the sun kept out, and the comfy seat, I was almost falling asleep, while holding on tightly to my ballon until we reached the finish line.

Our Capella S230T-13 Cony stroller has been with us for a couple of months now, and it has been through some really hard knocks. It flew to Hong Kong with us, got wet in the rain and now the shape run and it is still working well. If only the stroller was launched earlier, then Papee would not have spent so much on my previous 2 strollers. I am looking forward to taking the stroller to our next holiday!

We had fun at the Shape Run and Mummy says she wants to run in the 5km next year. Let's see if that really happens!

Alright, it is time for my nap, so bye bye for now!

Disclaimer: I was gifted with a stroller and reimbursed to take part in the Shape Run. All opinions are mine.