- October 19, 2013
Pre-kids, I often wondered why would parents bring their children, squeeze with the crowd to visit a mall event. Well... I obviously did not know better . With an energizer bunny as a son, there is a constant need to look for activities to keep J occupied.

When we were invited by Liang Court to take part in their Faboolous Halloween costume making workshop, I thought why not?!

While J may be a little young to work on any complicated handicraft, i figured he would be thrilled to be dressed up as a vampire or the likes.

I was oh-so wrong! He refused to put on the cape (only did so after much coaxing), was all squeamish when we attempted to do some face painting on him and he was more interested in running around the mall than soaking in the halloween atmosphere. Oh well! 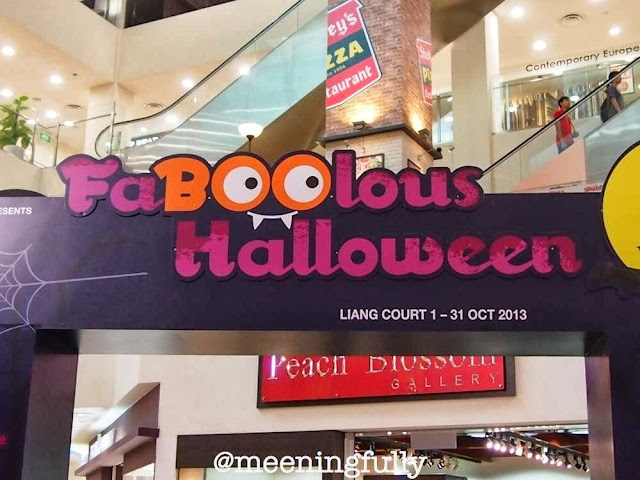 J's first mall event experience did not turn out the way we expected it, but I think we had an interesting afternoon coupled with some frustrating moments.

With an active toddler, events that requires him to sit for more than 10 minutes is really not the best way to engage him.

Perhaps when he is slightly older and all the crafting and dressing up makes more sense to him, he will then be able to better appreciate the activities.

In the meantime, we will keep to taking him to events that involves singing and dancing since he is so into dancing along with the Wiggles.

J's loots from the event, thanks to the good people from Liang Court:


Oh! Interestingly, I found out today that Liang Court is really positioned as a family mall. I have always thought Liang Court is the go to place for all things Japanese and I only visited the mall when I wanted to have a karaoke fix at a less crowded location.

After today's visit, I can appreciate how family friendly this place is with their well equipped nursing rooms and the other kids related retailers they have. Those who are familiar with indoor playgrounds, Liang Court houses two popular joints, The City and Royce Kids Gym.

While there is a constant stream of people at the mall, it is not overly crowded on a weekend. This works pretty well for us as both the hubs and myself prefer to less packed places to hang out on weekends.

Do drop by for visit if you have not been to Liang Court for a long time. Perhaps make it down this coming weekend as they are having a Halloween Kids Costume competition.

Have fun in the meantime!


Disclaimer: The family attended a private bloggers event that included a halloween costume making workshop. No compensation was received for this post, and all opinions are 100% mine.
frustrations outdoor fun parenting playtime recommendations toddler weekend exploits