I am no fan of visiting tourist attractions on weekends as I cannot deal with crowds. However, with a young boy in tow now, I would have to slowly get used to it.

We got there pretty early, at 10 am, right when the aquarium opened, but there was already a queue forming. The moment we entered, the place was jam packed with people and human traffic was definitely slow-moving.

Crowd aside, the place is huge! While it initially looked liked we have just entered the underwater water world, you will notice the difference lies with the types of fish species you see around you.

J was definitely mesmerized by the sights, going "oooohhh!!! AAAAHHHH!" every time a shoal of fish swam over his head.

The aquarium is home to over 800 over species of marine life, from 10 different habitat zones. Definitely the largest by far. Having been to a couple of aquariums in other countries, the variety of marine animals you find here is more than enough to entertain the usually disinterested me.

What I was more pleased with was J was enjoying the visit a lot! He kicked up a fuss each time we try to pry him away from an exhibit. I am pretty sure if he had the whole place to himself, with all the time in the world, he will just plant himself in front of the gigantic tanks the entire time. 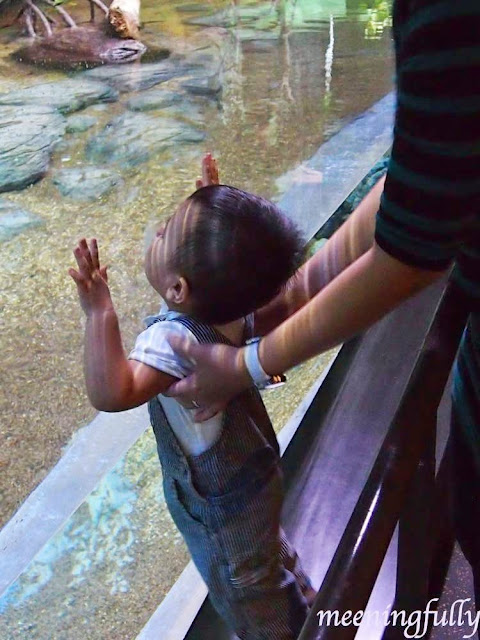 By the time we were done, it was already about 12pm, and Jonas was showing signs of tiredness. Despite that, you know he truly was enjoying himself when he starting running around, anticipating more play, fighting sleep.

I will be bringing Jonas back to the SEA Aquarium again, pretty soon. But, the next time, it will be on a weekday when it is less crowded. Bringing an active boy, with a stroller to the aquarium proved to be an extreme challenge and my advice is, if you can do without a stroller, then don't bring it in, Also, remember, best to go first thing in the morning to beat the crowd who could potentially turn rowdy.

You can find out more about the SEA Aquarium here, and tickets can be purchased beforehand if you don't fancy queuing.

So, looking for somewhere to go this weekend, why not take a trip to Sentosa and visit the world's largest aquarium!