- August 08, 2007
4 down, 6 more to go. This is not including those I have to attend with Hwa. Everyone’s getting married, which means we are all getting old. Haha!

Last Sunday's was at Shangri-La.

The invite stated dresscode: Formal. I looked at it and pondered for quite a while. I was unable to make out what formal really meant. Din want to turn up neither under-dressed nor overdressed. It didn’t help when I wasn’t feeling sociable last evening.

Anyways… appeared in a green and white ensemble. Not too casual… but good enough for a wedding I thought. But alas… just like what I feared… I was underdressed. People were in gowns and bow-ties! **Faintzz**

Good thing, the rest of the peops at my table were underdressed too! So din feel all that awkward after all.

It has been some time since I met up with the ACJC council people. While in school, I was one of the quieter ones (I think I was! hahah), and I never really liked to hang around the rest of the council people. In fact I try to avoid them. Just have nothing to talk about. I prefer smaller groups of friends… going out for coffee one-on-one etc, and that’s where my firm friendships are formed.

Oh well… the evening went by slowly. I just sat there, smiled… said hi… bye… updated on what I was doing…

The rest of the peops were talking about investing and property the whole night! Maybe I have been mixing around the wrong crowd for the past few years. But then… I am happy … in fact Happi-er with the friends around me. That’s that! 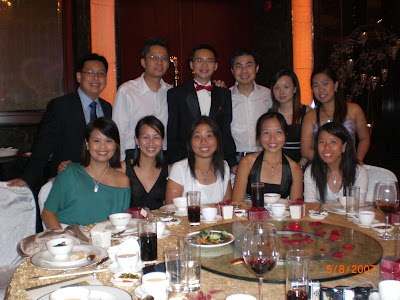