Showing posts from January, 2008
Show All 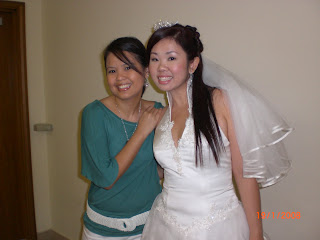 - January 25, 2008
Had my favourite Strawberry Shortcake from coffee club today. While savouring the sweetness of the thick white cream, it brought back memories of the occasional evening indulges I had with S 2 years back. On days when we had a hard day , we would treat ourselves to the chilled coffee and delectable desserts @ coffee club. Those were the days. S & B2 remained close to me since i knew them in 2005, B2 would always say S & I were so much closer compared to with her. Then, all of a sudden, just before I came to this new job... she stopped picking up my calls, i even witnessed her ignoring my call..... i think B2 mentioned this in her blog sometime back. I never knew why until now.....the great vine says S is angry with me for taking the credit from her.... for what she did back in S_ _ _ A. Crap! A whole load of bullshit! We were not even in the same dept, and were of a different level. Why would I do that? And as a friend, shud she not have had more trust in me, than to beli
1 comment
Read more

I wanna live in a bubble.

- January 17, 2008
Tired. Really exhuasted. Tired of incosiderate people at work and at home . Tired of living not being able to live my own rules in my own home. Tired of not knowing what home really means. Tired of having people nag at me on things that really doesn't concern me. Tired of playing peacemaker whenever they argue. Tired of people being confrontational when they feel lousy. Tired of being accused of not being nice to some people, when the accuser acts the same way. Tired of the " only I can be unreasonable and no one else can" attitude. Tired of people simply HEARING... and never LISTENING. Tired of staying in the bathroom...tearing...and not have anyone to share kinda feeling. Maybe... I should live in a bubble.... floating around... alone.
1 comment
Read more

Why does time pass so slowly… 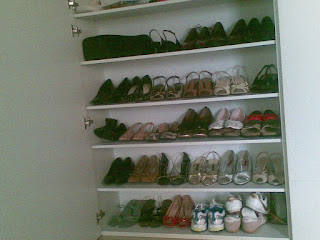 Last week was bad. Though there were tonnes to do, time seemed to take forever to pass. I checked the clock very few minutes, hoping that it was time to go home. It didn’t make time go by any quicker. The week was sooooo LONG. Was hoping that this week will be better….NO LOR! My Monday was horrible. Did not get much work done in the morning. Looked through the same document like 5 or 6 times… and still din do anything. Boss is not around… still in Hong Kong… but she is already terrorizing us…with funny , “do-it-now” requests… when it is not important at all. And…. So what if we do it now?! She is NOT here to see it! Faint! Then, I have like 5 meetings to attend from Wed to Fri, with my boss…. So not looking forward to it…PLEASE Tell me how to make this week bearable? I so wanna get my butt to do something and make a difference… but how? No motivation… no drive…. Then the question comes up of whether this job is for me. Yes.. I am learning a lot of things… and the projects are actually
2 comments
Read more

the TOE survived the Assasination

- January 06, 2008
My smart husband tried to murder my right toe yesterday! He drove our car over my toe... and he did not know. Even after i screamed out in pain.... he continued to drive forward, which means more of the tyre was on my poor toe. Sigh.... what more can I say.... I wun go into detail how we found ourself in this fix...just glad that my toe survived the ordeal.. with just a bruise.
1 comment
Read more 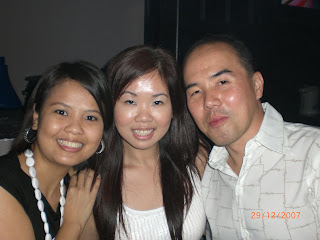 Yup! It was my 1st wedding anniversary on Sunday. But, dun asked me how Hwa and I celebrated it. Hwa has never been a really romantic person and often needs prompting from me. So…. Since I did not hint nor prompted him… then there really wasn’t anything I could expect. In any case, with all the festivities… everywhere’s crowded, and I realise I am beginning to hate crowds. Hate the bumping into each other… the looking for a carpark lot… the queuing for a restaurant table etc. So sometimes, the peace and quiet at home is more inviting. Well… though I would say… some flowers would have been nice?! Haha! Attended the “SAFRA Party of Year” last Saturday, which was SAFRA’s year end and final party of the year @ St James Powerhouse. This will probably be the last SAFRA party I will attend as well. Although the ex-MBians were there with me, I just felt weird. Not comfortable at all. There were familiar faces…yet, I feel so strange. Like I do not belong. That is probably the fact. I’m never a
Post a Comment
Read more
More posts